This Tuesday, October 22nd, is International Stuttering Awareness Day and I thought I would write a few personal blog posts about my own experience of having a bad stutter. Part 1 will be about my stutter, Part 2 tomorrow will be about how I have worked on my speech and Part 3 on Tuesday will be about how to speak to someone with a stutter. People often don’t know too much about stutters and I thought it would be good to help get some more awareness out there as it helps everyone involved.

People often think that a stutter is just the repetition of sounds, getting stuck on a word or physically contorting your face to get the words out. A good way to describe what a stutter is actually like is that it’s like an iceberg. The bit above the surface is all the things you can see. But the bigger, heavier part of the stutter is under the surface. Things you can’t see like the emotions of fear, embarrassment, shame, guilt, self-hate and also other tricks such as changing words or avoiding situations. 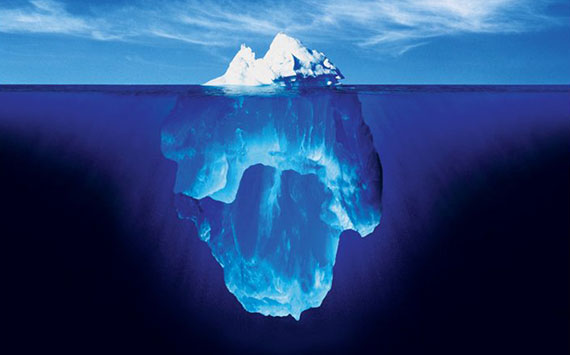 I used to go to various lengths to avoid speaking or avoid certain words. If I was in the house on my own I would often unplug the phone just so that I didn’t have to answer it. If someone rang the doorbell I would run upstairs and hide so that I didn’t have to speak to them. When getting a train I would often ask for a return ticket even though I wanted a single, just because it was easier to say. So stuttering can be an expensive problem too!

I used to be like a walking thesaurus always switching words at the last minute and wasting so much energy in the choosing of my words. But I would only be saying what I could say, not what I wanted to say. I would sometimes say fancier words because they were easier to say. People might therefore think I was posh. I would sometimes give the wrong answer to a simple question in school, just so I didn’t have to say a difficult word. People would think I was stupid. I would sometimes speak in an American accent in order to get some words out. People would think I was either American or just plain strange. But the thing is I would rather they thought these things than know that I was a stutterer. In our tribal society we don’t like to be different from others and that’s how much stigma stutterers can hold towards their speech.

When I couldn’t avoid and had no choice but to stutter I used to screw up my face. I would stick out my tongue and sometimes end up spitting on people. I would tap my foot or slap my leg to get the word out which would make me look like I had other issues. I would struggle so much that I would run out of breath and end up gasping. Stuttering is a strange beast and it’s not something you can avoid indefinitely. Communication is an essential part of being human. Having a speech problem can hugely affect your interaction with others, how you present yourself to others, your social skills and also affect things like what job you want to do and where you want to live. Even when choosing partners stutterers sometimes refuse to go out with people whose name they find difficult. It can change the direction of your life to that extent.

Speaking is such a fundamentally simple thing for most people to do, including small children, that it’s extremely humiliating to not be able to do it. When a non-stutterer stumbles on their words they may laugh and say “Oh, I can’t even speak today!” which highlights how it is so embarrassing that they can’t do such a simple thing as speak. This highlights the pressure that stutterers feel every time they open their mouths.

Stuttering also doesn’t just affect you when you are speaking. In fact when I was actually speaking and stuttering I entered a sort of Twilight Zone where I didn’t really have any perception of time or what was going on. I would close my eyes and the stutter would just happen. Sure, when I opened my eyes again and stopped speaking I would get the strange looks and the negative emotions. But sometimes the worst feeling is before you start speaking, or before you entered a speaking situation. The fear. The fear that you might have to speak. Not knowing if someone might ask you a question. I used to take my watch off when I was walking down the street on my own because I was scared of someone asking me for the time.

My stutter for most of my life has been a very negative thing. The one positive thing that I remember being able to take from my stutter even when I was about 12 years old was that I recognised it had made me a more sensitive person. In the sense that I was more aware of and sympathetic to other people’s personal struggles. Some people have obvious physical deformities and have to deal with strange looks everywhere they go. Perhaps that’s harder but also perhaps they just learn to deal with it earlier. Stuttering is perhaps easier in some ways as you can walk down the street without getting strange looks, but conversely there is the constant fear of what people will think once you do open your mouth. They’ll suddenly realise that you are different. I used to often go to ridiculous lengths to keep people from finding out that I had a stutter.

Stutterers live in fear. Fear of speaking. Fear of stuttering. Fear of being different. It’s not nice to live in fear and I’m glad to say that I was able to break the negative cycle and turn my speech into a positive. I could finally see that having a stutter wasn’t the worst thing in the world. More on that tomorrow… [Stuttering: Part 2 of 3 – Working on my speech]